Get to know the Kwiziq team! -  Shui Ng González

Meet Shui Ng González. Shui does at lot of work backstage, project managing the Spanish exercises and blog posts, writing content, reviewing and approving lessons, translations, proposing improvements and troubleshooting, plus her share of helpdesk issues and forum questions. She's got a lot of strings to her bow! You'll probably know her best from the weekly Spanish newsletters and Weekend Workouts; Shui also took over from Laura last year in sending out the French newsletters, and she's only just handed over this last task to our French Expert Aurélie!

I decided to ask some varied and probing questions to truly get to know the real Shui.

Hello Shui, can we start with the story behind your name?

Hi Rowen! My father is Chinese and my mother is Spanish. My Chinese surname is Cantonese, the transliteration of which is Ng but in Mandarin it would be Wu or Woo. I'm British and I grew up bilingual Spanish and English. I was born and grew up in the UK, but I spent time in Spain as a child and went to pre-school there. Back in England, I had to go to Spanish school after regular school, following the same curriculum as the Spanish kids my age. So as well as regular UK schooling I have the Spanish certificate of compulsory education.

3 fun facts that people don't know about you:

Most people who know me know some of this, but you may not know that:

1) My big hobby is rock-climbing, 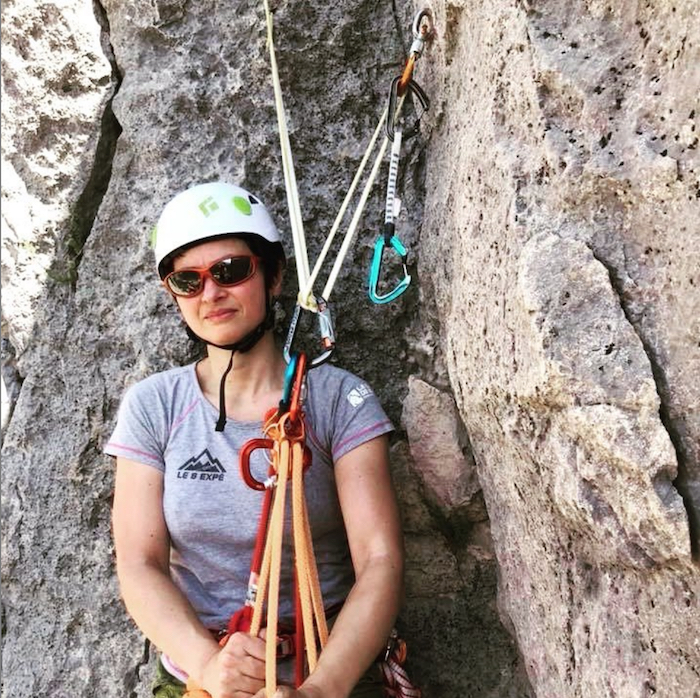 2) Everyone thinks I'm really literary, and it's true, I love reading! But I'm also a bit of a geek about Marvel films. I really love action and superhero films. My favourite is Iron Man. He doesn't have superpowers. He’s so annoying. He's so smarmy and up himself because he knows he's clever. And rich.

English, Spanish, French and Italian. Italian is sadly in last place, because I learnt it most recently and as a hobby, as opposed to out of any great necessity. But I can watch a film, have an argument, read a book, that sort of thing. Having an argument is quite an important one! I know lots of swear words!

What podcasts or shows do you listen to in French?

When you live permanently in a foreign country (although it's odd to say foreign since I have French nationality) you have to make an effort if you want to keep up with news from your 'home' country, plus when you work as a translator or teacher of that language, you need to stay 'plugged in'. So for that reason, I tend to deliberately listen to many things in English. I keep up a lot with digital news, because that's just my thing, and I listen to the Guardian podcasts and a lot of cultural ones, such as the Southbank Centre one. However, one of the podcasts I listen to in French is Les cours du Collège de France, which is a higher education establishment that gives public lectures on all sorts of different topics. It's all a bit highbrow! They help me keep up my French at a higher language register. Another good French one is Les Pieds sur terre from France Culture - it always covers fascinating topics and is very diverse.

Where would you live if you could live anywhere?

Since I've lived in Paris for nearly 25 years, I'd love to live in a few different places temporarily, say for 3 or 4 years. Wherever I go, I'd learn the language. I'd love to live in Italy and really deepen my knowledge of Italian. It's such a great language. Even if I went somewhere where they speak English or Spanish, I'd still only want to live there for a while. I could live in New York if I knew I was only living there for three years. I'd also like to live in Hong Kong because of the family connection and my love of Cantonese food!

What are your favourite words in French or Spanish?

My favourite words are more expressions, really. Expressions that can't be entirely translated into English. For example, sobremesa in Spanish literally means, "over/on the table", but what it really refers to is that whole period of time spent at the table including after finishing a meal. It's a very Spanish concept because it's about the time spent talking with family, the endless coffees after a meal…

In French, I love the expression mine de rien. The translation depends on the context, it can mean something like, '"you wouldn't think it, but...", or "without suspecting that this happened…" but also "despite appearances" or "even though" - so many things! Without context you can't pin it down - that's what I like most about it!

I was with my French climbing club, on a climbing trip in Italy. It was one of those climbs where there's nothing, what we call 'traditional' climbing. You have to place your own protections, called cams. And I was halfway up a route, and the person who was climbing next to me fell. His nearest 2 cams gave way and he fell all the way to the ground. So I asked my belay partner to lower me down because I knew we were going to call the emergency services and I knew I was the only one who spoke Italian. Even though, obviously when you actually call the emergency services, they can reply to you in English, but when the helicopter turns up, they don't all speak English. So I did spend a lot of time running up and down a mountain talking to people, talking to the doctor, talking to the rescue team, going to the hospital to help fill in all the forms.

You're a hero!
Oh, no - they're the heroes. I'm sure the emergency services are used to dealing with random foreigners trying to climb mountains and stuff… I mean they probably would have got by without me in English. 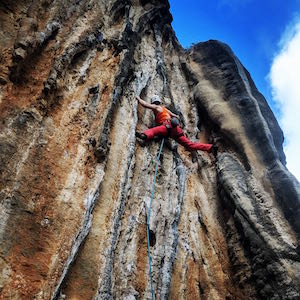 Oh, there's also this other thing that happened climbing that's a funny story: I was with my French climbing club again, but this time in the Peak District in the north of England, and as we passed people going to and from the different crags they would greet us saying Hiya! and I was saying Hiya! back. My French climbing friends soon started replying the same way. Later, when we sat down for a meal, one of my French climbing pals remarked that it was really lovely that the English climbers were so encouraging and showed so much solidarity. I didn't have a clue what he was talking about and asked him to explain. He said, "Well, they all encourage you to keep going by saying, 'Higher!' every time you see them. That shows great solidarity." I had to laugh! Then I had to explain that Hiya! was just a more colloquial way of saying hi...

I have four degrees - all language-related. A BA and an MA from London university and then those I studied for here in France. I've got two from University of Paris - one is a pre-Doctoral qualification, called a DEA (Diplôme d’Etudes Approfondies) and the last one I obtained is a DESS (Diplôme d’Etudes Supérieures Spécialisées) in specialised translation and applied languages for industry. I was proud to get on the course. There was an entrance exam and you had to be in the top 60 to be accepted and pretty much everybody else was French. I guess the thing I liked best was that after we graduated, we all became amazing friends because it was very intensive, lots of really hard work, you really had that feeling of all being in it together. Later, when one of our professors took a sabbatical, the University called me and asked me to teach his course that term. I guess that was the thing I feel most proud of - being called on to cover for him.

What do you most enjoy using your foreign language knowledge/skills for?

What's your superpower or party trick?

I can do handstands. And the splits.

Thank you Shui! More interviews with the rest of the team coming soon!