Get to know the Kwiziq team! - Laura K Lawless

Hi Laura, can you describe your role here at Kwiziq?

I was originally hired with the nicely vague title Language and Marketing Coordinator. I'd been working on my own language sites for years, and Kwiziq approached me to be an Education Partner thanks to my French site, which essentially meant adding kwizzes to my content. That was 6 years ago, and the partnership worked well. I was so impressed with the company and product that I bugged them until they hired me to work with the company itself. I helped set up a lot of the processes and communications (blog articles, weekly newsletters, FAQ) and created a bunch of content related to learning and practising language skills. Now I do a bit of everything - proofreading, marketing, testing bug fixes and site updates, responding to helpdesk emails…

American English, fluent French, conversational Spanish, some Italian. I'm learning Greek and could probably pass an A1 test, plus I remember a bit of Moroccan Arabic.

If you could live anywhere in the world, where would you live and why? 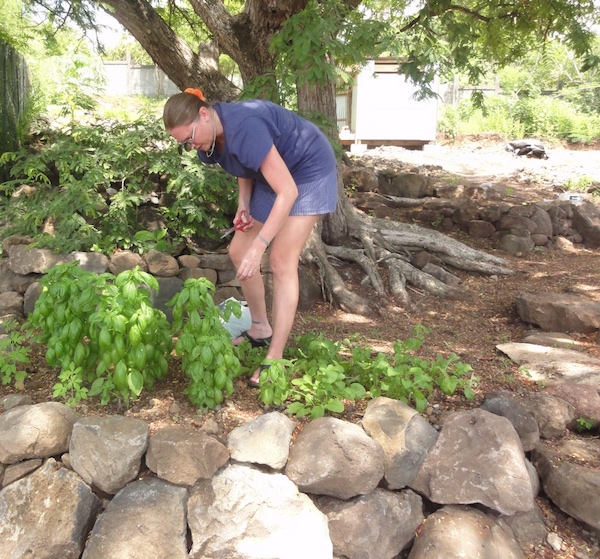 I always wanted to live in France and eventually did, for 6 years, but I found that it was just too cold for me, even in the south. Je suis très frileuse, as they say. My husband and I spent 9 months in Costa Rica, which I loved - I often told him that we could stay there if it were a French-speaking country. And then we visited Guadeloupe, which is the best of both worlds: a tropical climate that is part of France. I would love to have a little pied-à-terre in Athens as well, because it's such a great city and I have a lot of good friends there.

What are three things about you that most people don't know ?

1) In my early 20s, I was a belly dancer - sword balanced on my head, dancing around tables while the audience stuck money in my harem pants, the whole shebang. I started out taking classes at an adult education center. My class eventually performed regularly in a Greek restaurant and we were hired for a couple of parties. I also danced solo at a friend's wedding reception.

2) I make all my own plant-based dairy products like milk, butter, yogurt, and different kinds of cheese.

How? Out of what?
The most common ingredients are cashews, almonds, tofu, and deodorized coconut oil, which is unique in that it's solid when cold but liquid at room temperature, and therefore helps non-dairy butter and certain cheeses melt like their traditional counterparts.

3) I dabble in all kinds of different arts and crafts, including collages (paper, metal), painting (silk, watercolor, acrylic), mosaics, mobiles and pottery. Years ago I made a bunch of mobiles from recycling materials (plastic jugs, cans). The mobile behind my desk is made mostly from gold sheet metal, cut with tin snips, and the figures dance in the slightest breeze. 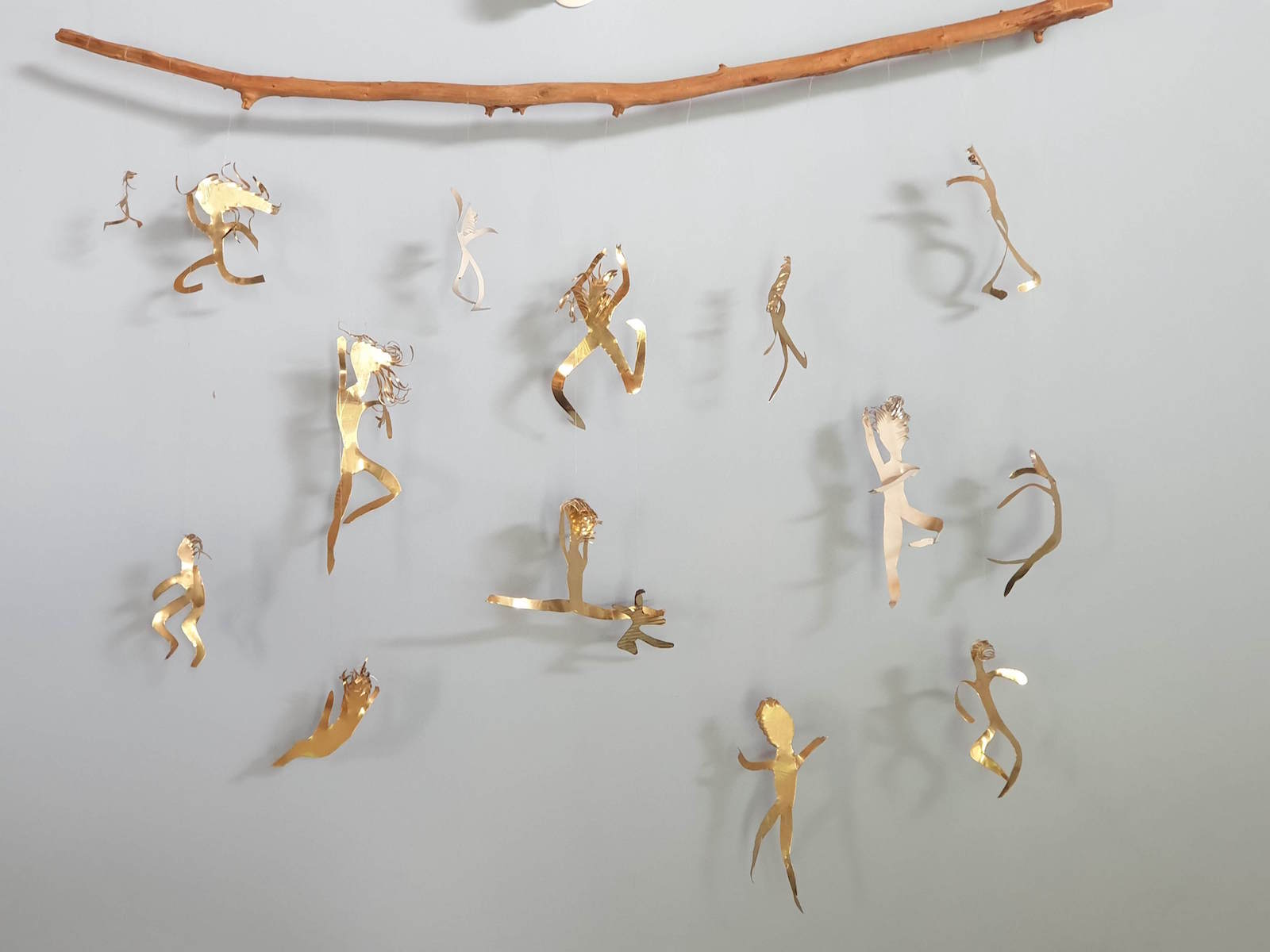 My fishbowl paper collage was unusual in that I woke up one morning with the idea and made the whole thing by lunchtime. 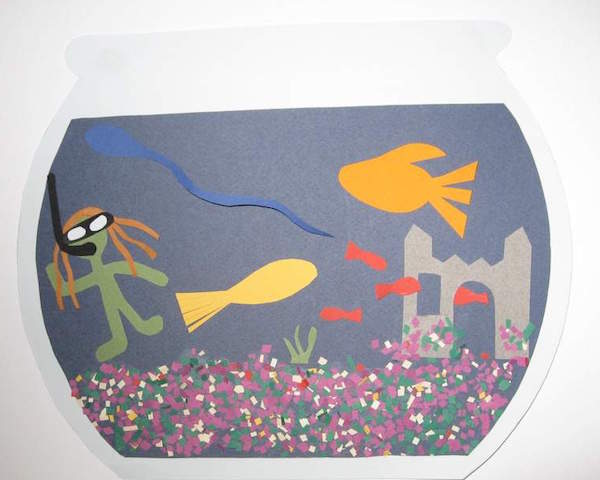 I always have an eye out for interesting materials that may, some day, inspire me to do something. I have a huge box of junk - I mean colorful paper, textured packaging materials, interesting bottles ....

Are you inspired by any particular artists?
Not in my own art. I mean, I love Van Gogh but I don't make any effort to paint like him. And I absolutely adore the architect Antoni Gaudí. I was completely blown away the first time I visited Barcelona - and the second and third. His work inspires me personally - I just didn't know you could do things like that; he inspires me to be more creative in my life, not just in art.

In French - époustouflant. It's not accurate to describe it as "onomatopoeic" but it's something along those lines - I think it sounds like what it means: stunning, breathtaking.

In Spanish - albaricoque = apricot, because it's just so fun to say! An oddly similar word in French that is also fun to say is coquelicot = poppy.

I studied Arabic through Spanish. When my husband and I lived in Casablanca, we wanted to learn Darija (the local, spoken dialect of Arabic), but the only classes we could find were for Classical Arabic. A few months before we left, we discovered that the Instituto Cervantes (Spanish language and cultural center) offered Darija classes, and of course they were taught in Spanish so that's how we finally got to learn some.

How did you find it learning a foreign language in a foreign language?
Oh, it was tough! My Spanish is A2, maybe B1, so there were plenty of words the teacher used that I didn't know or had to really think about, and once I figured out what they meant, he was already three sentences down the road. Definitely not an ideal situation. And my notes are just chaos, written in Spanish, French, English - whatever came to me the quickest.

My French website(s). In 1999, I decided I wanted to work from home and I taught myself how to create a website literally with HTML for Dummies, then started looking for a job. Very quickly I found a dotcom that needed a French site, and I worked on it for 15 years. For much of that time, my site was the top ranking French website for just about anything you might search for - learn French, French grammar, etc. I left the dotcom to create Lawless French in 2014, and while it's not as big or prominent as my old site was in its heyday, I am still well known in the field. My Spanish and brand-new Italian sites are nowhere near as popular, but I'm working on them.

What do you most enjoy using your foreign language skills for?

Traveling and meeting people. Talking to people in their language invariably offers a much richer experience than sticking to my own. I went to Athens for 2 months, and the day after I arrived I did a food/walking tour with a local guide. We hit it off, in part because she was intrigued by the fact that I was there to learn Greek. Thanks to her, as well as via other workshops/tours, I now have a number of good friends in Athens, who are all surprised/impressed/delighted by my efforts to learn and use their language, even though I have to switch back to English far too soon.

Do you all meet up together, or do you have individual, one-to-one conversations with your Greek friends?
Both. I met some of them through others, so I have spent time with them individually and in small groups. One delightful woman I met through a private cooking class she offers at home. I immediately adopted her as my long-lost and heretofore unknown Greek sister. I was supposed to return to Athens this summer and had planned to stay chez elle for a week. But of course that didn't happen.

And how do conversations go, do you start off in Greek and then revert to English or go back and forth between the two?
I greet them in Greek and try to stay with that for as long as I can. Usually what happens is we go back and forth for a few sentences, then I have to ask for a word or conjugation which I then use in the next Greek sentence ... but around then my knowledge is pretty much used up and we revert to English. The problem with being A1 is that my vocabulary is limited to things like saying my name, where I'm from and what I do, but of course my friends already know all of that, which means I don't have much left I can say to them in Greek. Must learn and practice more!

What one feature about Kwiziq do you like most?

The Brainmap - because it really helps you see what you've been working on, what progress you've made, and what you still need to work on. As a language learner as well as a creator of websites for learning languages, I know full well how unwieldy grammar is, with related and overlapping aspects; it is extremely messy. But our Brainmap makes it so easy to see where you are and where you still need to go.

I definitely understand students' need to have a reason for why something is wrong or has to be said a certain way. I love grammar and I feel very strongly that it should be studied; I don't believe in language courses that avoid or minimize grammar. Sure, you can learn to speak to a certain level without diving into the grammar, but you won't be able to make connections between, for example, different conjugations and structures that you can immediately grasp when you study the grammar itself.

I can see the future.

Um, you're going to have to unpack that one for me...
When someone suggests a new project or direction, I immediately imagine potential outcomes (positive and negative). When reading an article or lesson, I can anticipate where students are going to have trouble understanding or need more details because I can predict what is likely to confuse them.

All of them! There's this great book, The Languages of the World, by Kenneth Katzner, that introduces different languages, with short descriptions and an authentic text. Now of course you can find that with Wikipedia, but at the time, it was just so much fun to dip into this book and get a taste of all these new languages.

But more practically speaking - Greek, definitely. I really want to reach conversational level, B1 at least, hopefully B2. And I'd love to do more Arabic. I got just the barest introduction while living in Morocco, and it was fascinating, especially the etymology. As I recall, the words for document, book, library, desk, office, and write all share the same root - how cool is that?

Very cool! Thank you Laura! More interviews with the rest of the team coming soon!