Get to know the Kwiziq team ! - Céline Pickard

Today I'm talking to Céline Pickard, one of our French Experts.

Bonjour Céline! Can you describe your role here at Kwiziq?

Bonjour Rowen! I'm a new addition to the team. I mainly answer questions on the Q&A forum for students who have questions about lessons, exercises, grammar tests etc. But I'm still learning the ropes. I also help Aurélie with French content and also with our social media content.

French - because I am French. I speak English, British English (I studied in England) and I studied English at university in France as well so I use English every day. And a little bit of Italian.

If you could live anywhere in the world, where would you live and why?

I've never been to Scandinavia and I'd like to go to Norway. It's somewhere that I quite like. I come from Brittany and in France we're used to the sea and also the mountains, it's not too far as such, so Norway would be a good country that would be nice to see, because they have the sea as well as the mountains, and the fjords. I like the way they're progressive in society.

What about the climate?

I don't mind the cold! I actually prefer it…

What are three things about you that most people don't know ?

1. I like to read dictionaries. As in the paper ones, not the electronic versions! If I see something in there that I'm looking for I can spend a lot of time on something. I got into the habit of doing that at university, doing lots of translations.

2. I come from Brittany and we're quite famous there for pancakes: les galettes and les crêpes. But people think that we all love doing that, but I just hate making them, I hate cooking those things! They take ages, I don't like it! Which is strange because it's part of my heritage, I grew up with it. My grandmother would spend hours around Chandeleur [Candlemas Day - February 2nd] making some crêpes and all that, my Mum as well. They all have a special, massive crêpière, like a gas hob, and a massive pan as well, but I just don't like doing it. I do it for my kids from time to time, but that's about it. But if I'm in a good mood, I think, ok, let's do it.

3. I play the bombarde 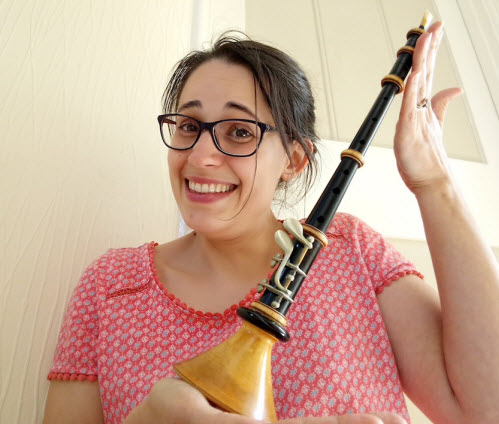 It's a Breton instrument. I'm born and bred in a family of, well my Mum especially, is a Breton maniac. I won't play it for you now because it would hurt your ears…

So what is the sound similar to?

It's a bit like a bagpipe, but less powerful. You sometimes need ear defenders, especially when you play it in a group. In Morocco, I think or Algeria, they've got similar instruments - it's very powerful. It's a melodic instrument - you learn it with an Irish flute because it's nicer on the ear. And then you go outdoors with the real thing.

How do you practise it then if it's quite a loud thing?

You can't really! It annoys the neighbours - it makes the dogs bark! But it's a massive thing in Brittany, obviously. It's a traditional instrument. But I don't 'advertise' it here, because I've noticed that it's a bit like saying you are a Morris dancer or something! When Covid is over, people should travel to Brittany to listen to it - there's loads of music festivals.

Are there any particular famous pieces that include the bombarde that people perform..?

Well, the Welsh anthem is actually similar to the Breton anthem and the languages are very close, they're linked together, so somebody who speaks Breton would sort of understand someone who speaks Welsh. Like the word église is iliz in Breton, and in Welsh I think it's nearly the same: eglwys. Also with place names, like Bridgend, in Welsh is: Pen-y-bont, and it would be pronounced 'Pen y bont' in Breton, too = le bout du pont or 'the end of the bridge', i.e. Bridgend. There is a town in Ille-et-Villaine, Brittany now called Paimpont and the origin of its name is from the Breton 'Pen y bont'.

Do you speak any of either language? Have you learnt any Welsh?

Well my son goes to school now and he learnt a few Welsh words, like the colours, and things like, bore da = Good morning. So I know those. But I can't say that I know Breton, because it wasn't taught in my primary school. My parents do speak Breton, but they would speak it so that my brother and I wouldn't know what they were talking about!

In English it's the word: Discombobulated. I like the sound of it. I always try to say it, but I can say dis- and then I just get stuck. It's the pronunciation - it's so hard!

In French, my favourite word is hurluberlu = eccentric, weirdo. It's a really old term. You'd use it to describe a situation like, 'I saw this eccentric man on the street' - and he'd be there in a coat and a flower on his head and gesturing around…

In Italian, allora because they always start their sentences with allora.

Well, I'm not a very adventurous person, so I don't end up in strange situations. It's not really a language situation as such, but when I was 15 or 16 my parents and I went on holiday in the height of the summer (which was a bad idea) in Portugal. And my Dad has had and still has this old camper van with no air con, nothing at all. It's a big machine. And he absolutely wanted to go there, so we went there but we ended up running out of fuel in a very remote place, a mountainous area.

My poor Mum had to stop somebody, flag down a car, and with the little bit of Spanish that she had and the little bit of Portuguese that she'd picked up along the way, ask for help. And this nice gentleman stopped in his sports car, a fancy car, and she had to fill a smelly jerry can with fuel. And that's one thing that's stuck in my mind.

So were you able to help in any way?

No, I was too shy back then! I had to stay with my Dad and my brother.

The fact that my kids speak French or understand French. They both understand, but Luka does speak French a little. He tends to answer in English, so you have to…well, there's two schools of thought with bilingual children, you either insist on them answering in the foreign language, or you sort of let it slide. I tend to try and insist on it, and I guess that it's just now that it's coming out that when I have my parents on Skype he'll say full sentences in French.

And does your husband speak French?

Yes! Yes, he makes all the learners' mistakes with grammar and he understands it very well. And he speaks it well enough. But now, to make progress I do insist he needs to go on Kwiziq. But he hated languages at school.

I suppose it's helpful if you're talking to your kids in French, for him to be able to back you up in French…

Yeah, and the funny thing about that is that I tend to tell them off in English, I don't know why, you would think my French would come out, but with him, when he's really cross with them, it's the French that comes out!

What do you most enjoy using your foreign language skills for?

Reading. Reading books or articles because I do like reading.

And apart from reading the dictionary, what books do you like reading?

Historical fiction or historical novels, or things that are more fact-based. For example, there was a book I read about one of the first cases in English history of a divorcee. Mrs Robinson's Disgrace by Kate Summerscale. But it's very history based.

And do you read articles - online or actual newspapers?

I just read articles from newspapers. I like things on Le Nouvel Observateur - 'Le Nouvel Obs', especially for teaching higher level students. I tend to have students who have the same thoughts as me on a lot of topics, so I can put things in front of them and we can have a really good conversation. Things like climate change or the gilets-jaunes movement to help people to understand the cultural aspect of French activism.

What one feature about Kwiziq do you like most?

I do like the Q&A - I think it's a very good tool. If you just had the lesson and that's it, it wouldn't be as helpful. Sometimes I've noticed that the student hasn't read the question very well or that in their question, they don't realise that they've answered their own question. And sometimes students ask about very tiny little things, which don't necessarily have anything to do with the lesson, but on the other hand it shows that they're involved and they're determined and want the others to get it right and they want our content to be right.

I have an acute sense of smell! That's all I can think of - it means I can't go in perfume shops, or if I go in a massive retail store I have to avoid the department for perfume or I have to just pinch my nose!

Do you associate certain smells with memories?

Yeah, my Dad had a workshop and there was the smell of oil, of metal and of the circular saw, when I smell that in a garage if I go to repair my car, for example, it brings me back to my Dad's garage and workshop. And also potatoes, when you unearth potatoes that you grow yourself, because we used to have a garden with loads of potatoes at my parents', it's the number one thing we used to grow.

Breton probably, because I don't! And it's part of my heritage. And Portuguese, I'd quite like to learn Portuguese because of the history. Again, I love history generally, so it's interesting. With the colonies that they had, the fact that - I think there was a Portuguese queen in England - and she brought in the thing about afternoon tea. And tea, actually. I'm more interested in older history than recent, but I think it links to the present as well.

Merci Céline! More interviews with the rest of the team coming soon!