Add to Notebook53 questionsReport a problem

In French, to express in/to + [country], you can use en / au / aux  depending on the gender of the country.

Learn how to say "in/to a country" in French

We know that countries and continents have genders in French [see Continents/countries/counties/regions/states are masculine, feminine or plural in French (Gender)]

Note that while we always use in and to in English for cities and countries, in French we use different prepositions for one or the other.
We use à with cities À = To/in and De = From/of with cities in French (French Prepositions of Location), it's a bit more complicated when it comes to countries.

Have a look at these examples:

Here are the rules:

- en is used with feminine countries (the ones ending in -e, except for Mexique, Cambodge, Zimbabwe, Mozambique, Belize) and continents (all of them are feminine)

- au is used with masculine countries

For pronunciation reasons, you will use en with masculine countries starting with a vowel:

- aux is used with plural countries

Note that Le Québec behaves like a country, even though it's a province: 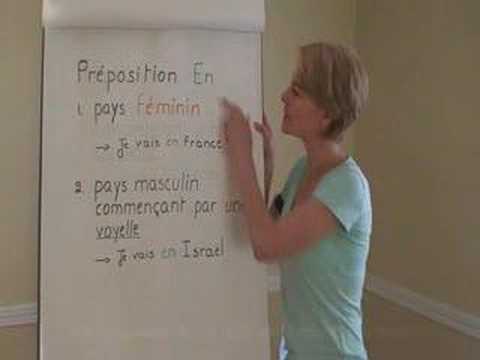